Starburst is popular because something happens almost every spin. The hit frequency is extremely high, while the payout percentage is also excellent. So Starburst is not only action-packed, but also a slot machine that is relatively cheap to play.

The well-known feature with the Expanded Wilds that remain sticky in the respins provide action and prizes. The top prize is 500 times your stake. Every (re)spin again you have a chance to win it. The flashing sounds and encouragements that you’re doing well (super combo, mega combo, etc) complete the picture! 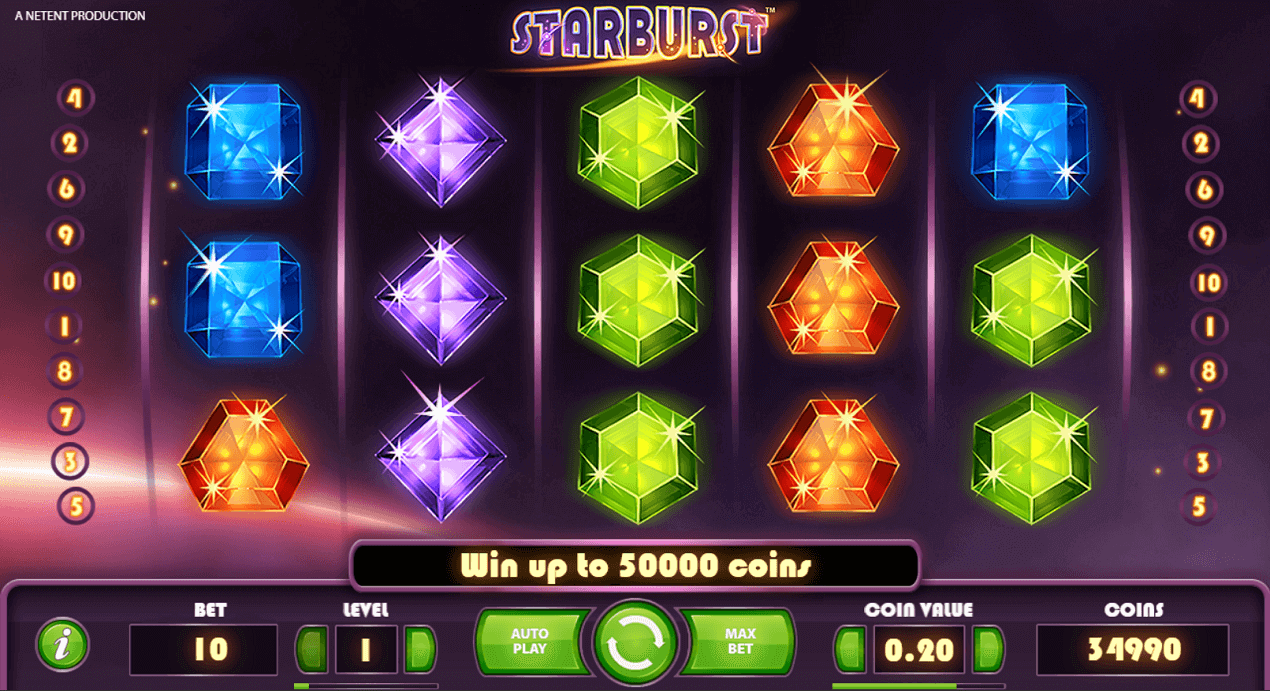 Ups, no game here? Please check this:
1. Please use the Chrome Browser for better experiences!
2. Deactivate your Adblock Plugin and load this page again!
Why Starburst? Starburst is video slot royalty. Nothing beats Starburst. Most played slot game and most loved among veterans. Try it!
OUR RATING 10/10
USER RATING
Rating: 4.0/5. From 1 vote.
Please wait...

Where to play Starburst?

How to play the Starburst slot machine.

Chances are slim that you'll come across a simpler game in the casino. Starburst you open, you set the bet as desired and then you click on the spin button, to start playing immediately. At no point are you directed to another screen, there are no numerous symbols to keep an eye on, and the setup is kept incredibly simple with five wheels and three rows.

Starburst is one of the slots where you have a great chance to win while playing by making combinations with BAR and 7 symbols. In this slot full of diamonds, the win lines can run from left to right and from right to left, Win both Ways. In total you can earn up to 50,000 coins with 1 spin including the corresponding re-spins, this applies when you hit a screen full of BAR symbols. In this slot you'll find yourself in the room with diamond symbols.

Here you have a total of ten win lines and three rows with five separate reels. The ten paylines run two ways, from left to right and from right to left. You don't have scatters and free spins in the Starburst slot, but there are Starbust Wilds that result in re-spins. This video slot from NetEnt was brought online in the year 2012 and today it is among the top 10 slots ever created by this software provider. What makes this slot attractive to play is the low stakes per spin and the simplicity that has been used.

The Starburst slot is used by many online casinos to give away free spins on it. This is because of the low minimum bet on the maximum number of paylines. You can play on 1 eurocent per payline which results in a bet of 10 eurocent if you want to play all 10 paylines. After some doubts I decided to place this slot under the heading video slots instead of classic slots. This is because of the extra features like re-spins that you won't encounter on a classic slot while playing. 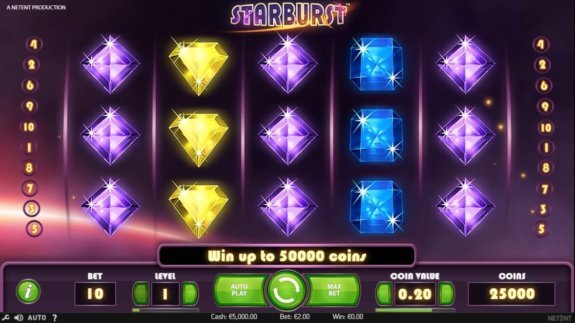 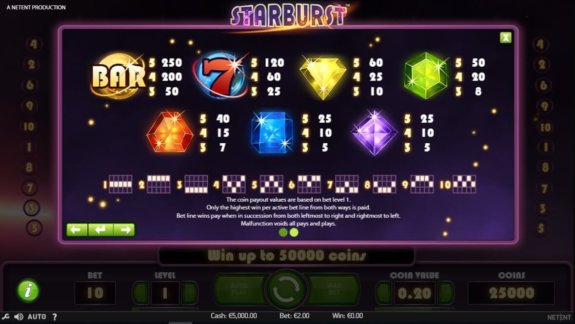 Starbust Wilds are the special wild symbols that extend across the entire reel. You can encounter these symbols on reels two, three and four. It doesn't matter what position they are in, they can cover the entire reel. The other reels will start to re-spin giving you a chance to win extra. Do you get another wild symbol during the re-spin? Then this one will also stay and you will get another re-spin. This process can be repeated up to three times, after which you automatically return to the main game.

Besides the BAR which is worth the most and the 7's which follow it, only diamonds occur in the Starburst slot. Besides diamonds, no numbers and letters are used. Below is an overview with the value per symbol:

The special star symbol that acts as a wild has no value of its own. It only creates value when a winning combination occurs because it is a wild. Something that has not often been touched upon with this slot machine is the use of music. NetEnt always makes sure that the best music and sound effects are used with the games they bring online. This ensures a better playing experience which results in more revenue (read bets). Even though the music usage at Starburst is a bit monotonous, it doesn't get boring.

Is Starburst a must play?

Although some people may feel that Starburst has become a little out of date, this slot machine remains a favorite of an awful lot of people who come to play at the casino on a regular basis. Not only because it's a simple slot machine and there are often bonuses to be found on this game, but also because you can just play Starburst at low stakes, set it to autoplay or just sit back and relax because there's little weird stuff happening on the reels. Highly recommended! Regardless of whether you want to play for high wins (the maximum win is 50,000 coins here), whether you want to play with a fun feature or just play an easy slot where you don't need full attention while playing.

Starburst is a Netent casino game. This means that the video slot was developed by the very popular Swedish developer Net Entertainment. Netent is known for the very high quality casino games they develop and for this reason the games are unprecedentedly popular with both online casinos and the players of these casinos. Especially the Netent slots, or online slots, stand head and shoulders above the competition. Not only the Starburst Netent slot is a slot game why players specifically seek out Netent casinos. Names like Jack Hammer, Twin Spin and Gonzo's Quest are also games that you can entertain yourself with when you play at a Netent casino. The best Netent casino offers all these games and more. Moreover, the best casino is reliable, secure and offers extra benefits to their players.

Playing for free with free spins

As mentioned, there are several online casinos that offer free spins Starburst bonuses. This allows Starburst to be played for free. Casinos often choose Starburst as their slot machine for giving away bonuses, because they know that this slot machine will please players. After all, the point of giving away a bonus is to get players to keep playing at the casino after the bonus is over. Starburst is well suited for this because almost everyone who plays the slot entertains themselves and longs for more. There are Netent no deposit bonuses that don't even require a deposit to receive the free spins and there are welcome bonuses that give away free spins or a combination of free spins and free money.

The best Starburst Netent free spins bonuses and online casinos can be found through this website. We constantly scour the internet and all Netent casinos for the best bonuses and ways to play Starburst for free.

How many win lines does Starburst have?

Starburst has a simple setup of 10 win lines. These win lines go two ways (win both-ways), so you can make combinations from left to right and vice versa.

Which video slots work the same as NetEnt's Starburst?

Several online slots work exactly the same as Starburst. Power Stars by Novomatic is the most famous (currently not playable online). EGT has also made similar machines such as Extra Stars. NetEnt is not the creator of this playing mechanism, Novomatic was the first provider.

What is the RTP of Starburst?

What is our final verdict on the Starburst slot machine?

You have to love it. If you like playing slots with lots of action and a low variance, you can't ignore Starburst.

Starburst gives you a high hit frequency and thus a prize (or prizes) is often won. That you can only win low amounts on Starburst is something we often hear, but it's not entirely true. Per respin you can score 500 times your stake. With a bit of luck, you can get some nice amounts out of one spin and a maximum of three respins.

Starburst is of course the most played online slot machine ever for a reason. And it's also one of the slots games that has been copied the most by competitors of NetEnt. NetEnt can't say much about it, because it took its inspiration from competitor Novomatic's Power Stars slot machine.

Starburst gets 5 out of 5 stars from us.