Spin Casino was launched in 2019 following a re-brand by the Palace Group, one of the best-known organizations within the industry today. Spin Casino is licensed by the Kahnawake Gaming Commission, as well as the Malta Gaming Commission, while they are owned by Bayton Ltd and Baytree Ltd. Players based in Canada are able to take advantage of a wide variety of services and features at Spin Casino, with our review taking a detailed look at their operation, including everything from games and bonuses to banking and customer support. Let’s start by outlining the main pros and cons of Spin Casino.

Those considering signing up with Spin Casino are in a position to potentially take advantage of a variety of attractive services and features found on their site, including a range of promotions, which are available to both new and existing customers. This includes a generous welcome bonus, providing an excellent platform to build upon. Meanwhile, the casino offers an efficient mobile platform, whether it be through a dedicated app or mobile browsers, making gambling in the move an easy task.

In terms of the currencies that are accepted at Spin Casino, players will be pleased to learn that Canadian Dollars is one of them, along with American Dollars, British Pounds, Euros, Australian Dollars, Swedish Kronor and New Zealand Dollars. As a result, deposits and withdrawals with the casino are quick and convenient.

The fact that Spin Casino is delivered by software provider Microgaming goes a long way to demonstrating just how reputable and efficient it is, with players being able to move quickly and easily between games and features on both desktop and mobile. Meanwhile, some of the most popular casino games online today are developed by Microgaming, meaning that players will never be short of options in this area, whether it be slots or table games. Elsewhere, live dealer games at Spin Casino are delivered by Evolution Gaming, with their studio providing players with the feeling of being in a real-life venue from the comfort of their own homes. 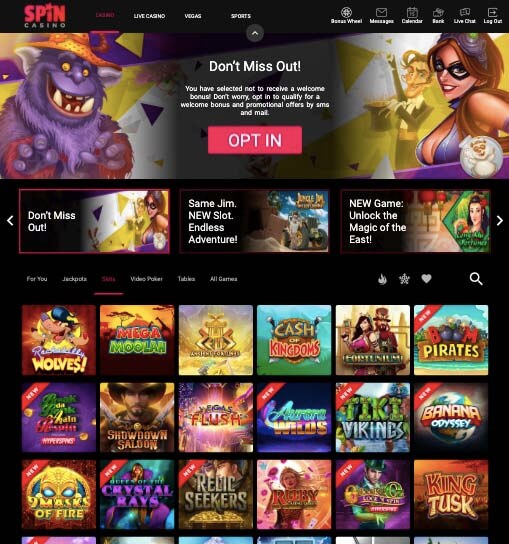 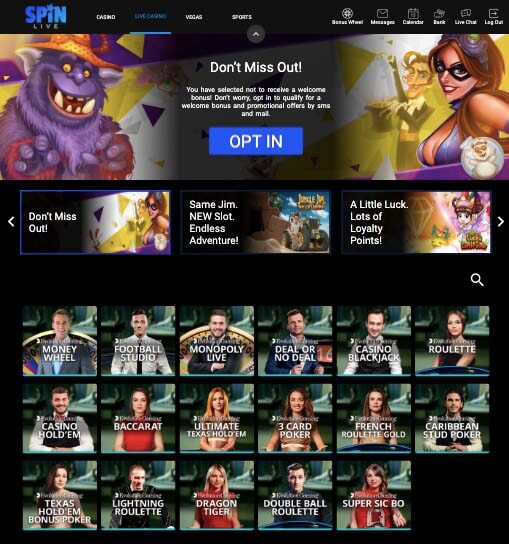 Our review found that Spin Casino offers one of the largest libraries of slot games found online today, with over 400 to choose from in total. As previously mentioned, such games have been developed by leading software provider Microgaming, who have gained an excellent reputation within the industry as a result of their jackpots and themes. Whether it be classic, five-reel or video, slots at Spin Casino also offer some of the biggest jackpots available today, with the most popular titles including Mega Moolah and Thunderstruck II. The former holds the world record for the biggest ever payout, which was over C$20 million.

A good number of table games are also available at Spin Casino, including blackjack, roulette and baccarat. As well as this, a small number of titles are available when it comes to craps and poker, while live dealer games are on offer too, streamed from Evolution Gaming’s studio.

Spin Casino Bonuses & Promotions: Get up to C$1000 Welcome Bonus

As we have already eluded too, there are a good number of promotions found at Spin Casino, which can be utilized by both new and existing players. Those who sign up for a new account at Spin Casino are able to earn themselves a bonus of up to C$1,000, with three separate deposits being required in order to claim the total amount. The casino will 100% match all opening deposits up to C$400, while second and third deposits will be 100% matched too, up to C$300. Bonus funds must be wagered x50 before any withdrawals can be made, which is a little strict when compared to other online casinos. The following is how games contribute towards the wagering requirements at Spin Casino:

VIP points are also available at Spin Casino, with six different levels of their loyalty program providing a variety of rewards for players. Upon signing up at Spin Casino, players will automatically be part of the VIP program, with 1 points being earned for every C$10 deposited. The more points gained, the higher level players will proceed too, while points can also be redeemed for credit at Spin Casino, with 1,000 points equating to C$10. As well as this, players care also in with the chance to receive additional bonuses, be entered into tournaments and enjoy quicker withdrawals. The different levels of the program can be broken down into the following:

Software provider Microgaming has helped to develop a hugely efficient mobile gaming app, which is available to iOS, Android and Windows users. The app delivers a large number of games, including slot, table and live dealer titles, while those playing via the app should have no concerns when it comes to security. Those not wishing to download the app can access their favorite games using the Spin Casino mobile website, however this platform is not quite as efficient. Both platforms allow for players to deposit and withdraw funds and utilize customer support features, meaning that there is no need to fire up your desktop at all times.

Live dealer games at Spin Casino are delivered by Evolution Gaming, another of the leading software providers in the industry today. Those based in Canada are certain to be impressed by the options available to them in this area, whether it be blackjack, roulette or baccarat in which you are looking for. Live games are available on both desktop and mobile, with dealers being both friendly and fair, with players being able to build relationships with such individuals, adding to the user-experience. Meanwhile, a small number of titles are available when it comes to Texas hold’Em and poker.

Those based in Canada have a large number of options available when it comes to depositing and withdrawing funds, including major credit cards, e-wallets and bank transfers. The majority of such methods allow for instant deposits to be made, while withdrawals are generally processed within just 48 hours, although this can take longer in some cases. In total, our Spin Casino review found the following payment methods were available to Canadian players: Visa, Mastercard, Interac, iDebit, Instadebit, eCheck, Paysafeacard, Neosurf, Flexepin, Entropay, EcoPayz, Much Better and Citadel.

For times when additional support is required, players at Spin Casino can communicate with customer services agents via both live chat and email, with the former undoubtedly being the most efficient option. Emails sent to [email protected] are generally responded to within just 24 hours, however players should make it clear that they are discussing Spin Casino, with the Palace Group managing a number of other platforms too. Meanwhile, a detailed FAQ page is on hand to deliver a vast amount of additional information, surrounding everything from gambling rules and banking to promotions and payouts. Support at Spin Casino is available 24 hours a day, 7 days a week, with the casino having generally received good feedback in this area.

Spin Casino underwent a major rebrand and rebrand back in 2017, helping the platform to become significantly more modern and interactive. The site is owned by Baytree Ltd, while it is licensed by major authorities in both Kahnawake and Malta, demonstrating their reliability and trustworthiness. Meanwhile, software providers Microgaming and Evolution Gaming have associations with Spin Casino, helping them to attract a large number of players in the process.

All games at Spin Casino take advantage of random number generators, helping to ensure that they are 100% fair. Meanwhile, the return to player rates at Spin Casino are also independently audited, putting customers further at ease in this area.

Spin Casino has gained a good reputation over the years in terms of fairness and accountability, with the organization utilising a random number generator in order to ensure that the results of wagers are fair at all times. As well as this, all activity at Spin Casino is regulated by eCogra, one of the best independent auditors in the industry today, which should put players further at ease in this area. Meanwhile, the fact that the casino holds valid gambling licenses from two respected authorities shows the work being done in ensuring that they remain fair and reliable at all times.

It is clear from our review that Spin Casino is a platform that should be taken seriously, with improvements having been made when it comes to usability and enjoyment. This perhaps comes as little surprise given the fact that software provider Microgaming are at the helm, with the number and quality of games having already attracted a significant amount of players. Their generous welcome bonus, VIP program and additional features only further demonstrate their competence, with Spin Casino having quickly become one of the most popular online gambling platforms available to players in Canada.