Jackpot Giant is an exciting progressive jackpot slot created by Playtech. Based on the theme of giants and their riches, the 5 reels, 50 paylines game offers wild symbols, bonus symbols and a jackpot prize worth 50,000 coins in a coin range suitable for both the casual and the expert players.

Why Jackpot Giant? Play Jackpot Giant by Playtech to win up to 50,000 credits in an affordable coin range.
OUR RATING 8.9/10
USER RATING
No votes yet.
Please wait...

Where to play Jackpot Giant?

Jackpot Giant is a popular progressive slot powered by the renowned game developer, Playtech. Since its launch, the game has received positive feedback from the gamblers from all over the world who fell in love with this bright and vibrant slot right away. The game’s unique characteristic is that it is both a jackpot and a progressive jackpot slot. Playable in 50p per spin, it also offers two bonus features which increase the chances of receiving more winning combinations and higher cash prizes. A set of 5 wild symbols on the first reel can reward you with the jackpot prize. As the game is highly rewarding with brilliant graphics and a vibrant outlook, one can always look up to this slot for an exciting and entertaining gameplay.

Jackpot Giant is a cartoonish looking progressive jackpot system where you can see high-quality graphics, great bonus features and a simple gameplay. It has two different features known as the Giant Jackpot feature and the Giant Bonus feature. Apart from the progressive jackpot feature, one can receive the huge jackpot prize worth 50,000 coins by landing 5 wild symbols on the reels.

How to Play Jackpot Giant by Playtech

Before you learn about the gameplay of the game, let us introduce to you how exactly the game looks like when you open the game you will notice the reels set on a 5 reels, 3 rows pattern. You need to first determine how much money you want to put at stake and then start spinning the reels. You will receive different sets of symbols appearing on the reels with each time you spin. If you receive 3 or more identical symbols, you will get a winning combination. The amount of prize money will depend on the value of the symbol and the placed stake.

Similar to most casino slots, the control panel of Jackpot Giant is situated at the bottom of the reels. Instead of an entire box containing the features, different settings are displayed on different stones varying in different shapes and sizes. You can see options for Paylines, Line Bet, Total Bet, Total Win, Turbo Mode, Autoplay, Spin etc. You can change the coin value by pressing the + and – functions and the number of active paylines from the “Lines” function. With the help of these, you can choose to play from £0.50 to £40 which will be multiplied by the number of paylines you choose. This is quite a good aspect of the game which remains budget friendly for the casual players and rewarding for the high-rollers. After setting the stake, you can press on the Spin button and set the reels in motion.

There is also an Autoplay feature which lets you spin the reels for a desired amount of times. This is a great feature if you feel like relaxing a bit in between sessions while the game continues without interruption. On the other hand, the ‘Turbo’ function spins the reels a lot faster. To check out more about the game, you can click or tap on the “Info” setting from where you can learn about the gameplay, the payouts, bonus features etc.

Apart from the base game, Jackpot Giant does not really offer any free spins and multipliers. It may seem like the game is lacking these awesome features, however, its huge winning potential covers it up quite easily.

If you have played other casino games from Playtech, then you probably already know that most games from this leading game developer are playable both in portable and non-portable devices. This is a great news for the mobile gamblers who can enjoy this high volatile slot anytime, anywhere. 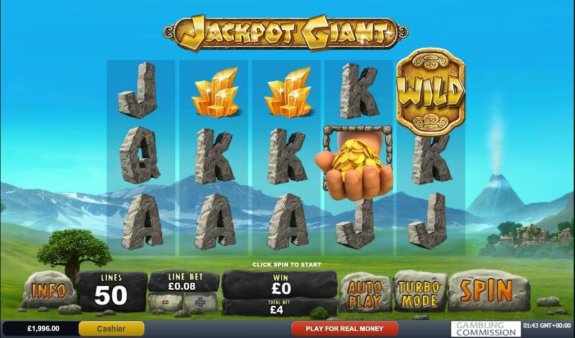 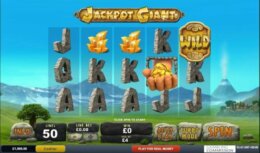 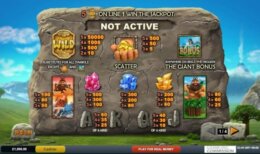 Jackpot Giant features some stunning symbols in transparent reels with a mountain view on the background. You can see the green grass, clear mountain sky view through the transparent reels. The symbols appear aesthetic which give a Stonehenge vibe. Most of the symbols are play card symbols, Ace, King, Queen, Jack etc. They contain the lowest values ranging from 10 to 60 on different sets of combinations. While both Jack and Queen give 40 coins for a set of 5 on the reels, King and Ace give 60 coins each on a combination of 5 on the reels.

There are two similar looking giants in different places, one near the volcano and another near the deep forest. Between the 2 symbols, the forest giant awards 80 coins with a combination of 5 on the reels whereas the volcano giant pays 100 credits in the same combination. The payouts from all the symbols start to lessen when you receive 4 or 3 identical ones on the reels.

The bonus feature in this game is known as the Giant Bonus symbol. It can be triggered when you land the volcano symbol on the first and the fifth reel. Once you get these, you will be taken into a bonus game where the Giant stands behind 6 volcanoes. You will have to pick any 3 of them. Each one contains a different kind of reward and you will receive the cash prizes depending on the volcanoes you pick.

Jackpot Giant is one of the most popular progressive jackpot systems from Playtech. Its popularity is not limited to the fans of the game developer but surpasses many other jackpot slots from many other game developers as well. Such is its demand that many online casinos offer this game at their casino lobbies. If you have been thinking about whether we offer the game at our site or not, then you will be glad to know that we offer the demo version of the game. To try this amazing game for free, you will not have to create an account here. Just visit our site and unleash the fun! Train yourself properly, knowing the ins and outs of the slot before jumping in with real money elsewhere.